At least two, and possibly more Cletrac Crawler Tractors were purchased for use at Victoria’s Mount Buffalo resort in the late 1920s and early 1930s. 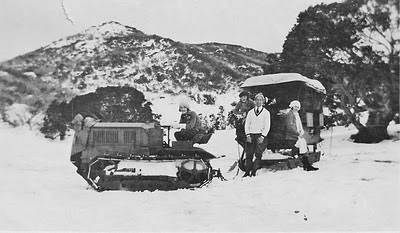 Barbara Turner has located the excellent picture above of the Mt Buffalo service in 1929 with a Cletrac pulling a passenger sled that looks to have been locally built. This tractor seems slightly smaller than those in later pictures and may have been an earlier model. One of the respondents to Barbara's picture notes: "This tractor is shown in 'The Mount Buffalo Story' by Webb & Adams, with the following caption - "Proficient skiers rode on a sled drawn by a tractor, usually driven by Fred Chalwell. The journey to Cresta from the Chalet sometimes took an hour" Picture: Barbara Turner
http://www.flickr.com/photos/historyinphotos/3271977128/ 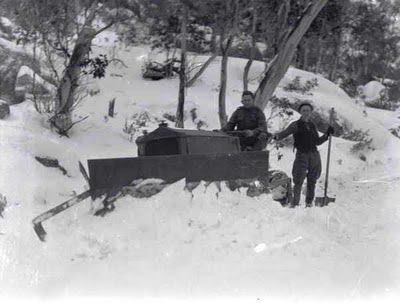 c.1930 a Cletrac is employed helping clear snow. While the Cletrac company did make snowplough attachments, I haven't located one looking similar to this yet, and it may have been locally built.
Picture: State Library of Victoria 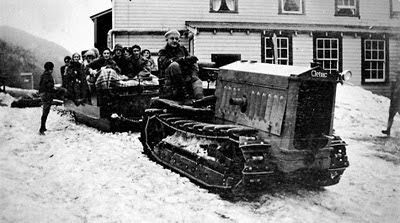 c.1938 a Cletrac pulls an open sled full of well rugged-up tourists around the resort.
Picture: State Library of Victoria

David Sisson has done some research on the above picture and found the following: "I came across details of the service this vehicle provided.Tractor to Hump. (6 mile trip from Buffalo Chalet to Cresta ski runs). 10 shillings return, includes sandwich lunch . 2/6 extra when grill lunch is provided. It looks like this was a regular shuttle that ran several times every day. Source: Gerald Rush. 'A course of practice in ski-ing.' Vic Govt Tourist Bureau, June 1933. Page 19"


David has also sent some information and a picture of a Cletrac operating at the Feathertop Bungalow in the 1930's. The Feathertop Bungalow was a hotel that operated on Victoria's second highest mountain from 1925 to 1939. David's excellent history of the Bungalow and Mt Feathertop is at: http://wikiski.com/wiki/index.php/Feathertop_Bungalow

David notes the Victorian Railways bought Feathertop Bungalow from its private owners, so his guess is that they transferred a Cletrac from the Buffalo Chalet which they also owned.  Here's the picture, with it towing what appears to be a tracked trailer: 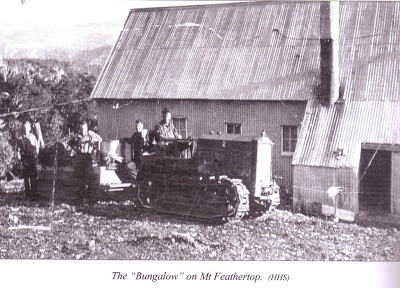 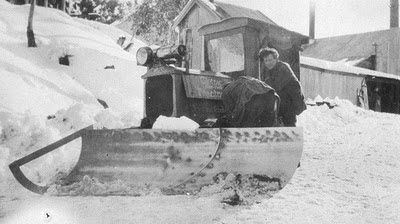 This picture taken between 1940 and the late 1940s shows a Cletrac having been fitted with a makeshift (but no doubt welcome) cab, and again with the plough fitted. Picture: Mitchell Library, State Library of New South Wales
Newer Post Older Post Home