Perhaps the first form of mechanical traction in the NSW Snowies was tractors hauling sleds. The below picture is perhaps the earliest record of this, the caption in the book dating the picture at 1928.

Picture: KAC Collection in "Skiing off the Roof", Rick Walkom
The sled being hauled looks locally made, and I think the motorbike rider is very brave! The SLNSW has a less clear picture of what may be the same tractor in an undated picture: 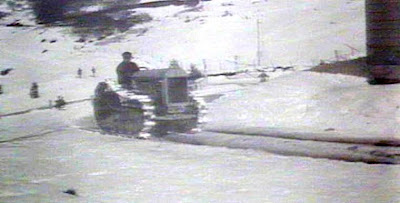 These early model tractors seem to have disappeared from use in the early 1930s when the Citroen Kegresses came into the fleet. However by the late 1930s it would seem tractors were back in use having replaced or at least supplemented the Kegresses in service on the run from the where the cleared road ended and the snowline began through to the Hotel Kosciusko, the Smiggin Holes Café and the Kosciusko Chalet at Charlotte’s Pass (length of trip presumably dependent on depth and clearance of snow). This time the tractors were bigger - The book 'Skiing off the Roof' notes that after 1936 the Kosciusko Chalet purchased a converted D4 Caterpillar and an Allis Chalmers tractor which were used primarily to haul baggage sleds, and a homemade caravan for guests popularly known as the "ice box". The below picture dated c.1939 shows one of the new generation of tractors pulling a sled that appears to use one of the Kegresse bodies as the passenger compartment. 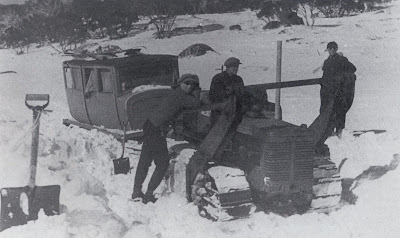 Picture: Day Collection in "Skiing off the Roof", Rick Walkom 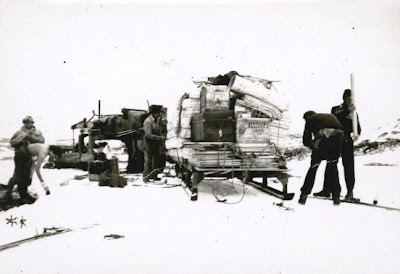 This picture dated 1940 shows an unidentified tractor, possibly the Chalet's Alice Chalmers with a sled of goods for the Kosciusko Chalet.
Picture: Donated by Cheryl Dunn of behalf of her Father Clarrie Dunn and her Aunt Eva Oddy, nee Dunn, National Library of Australia 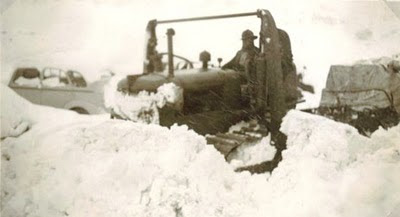 In this 1946 photo, a Department of Main Roads tractor is arriving at the Hotel Kosciusko towing a sled carrying 3 tons of stores.
Picture: National Library of Australia 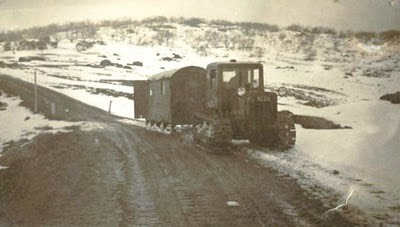 A 1947 picture of the Chalet's D4 Caterpillar with the locally built "ice box" near Wragges Creek.
Picture: National Library of Australia

Bill King has kindly reached out with recollections of the Tractor and "ice box" transport at this time:

"In the winter of 1947, when I had turned 8 years of age, my Auntie and Uncle from Canberra, Tim and Helen Ingram, took me to Smiggin Holes and Perisher Valley. I remember boarding the oversnow transport at the cafe at Smiggin Holes at about 9pm. The transport was a crawler tractor which had a large cab built on it, the passengers including myself sat behind and either side of the driver. This machine had glass windscreen which from memory was as large as the front of the cab. Several hundred metres up the road (snow), the crawler became bogged in the snow to the top of its tracks.  My Uncle along with several other men got out with shovels but the crawler remained bogged.  Some time later another crawler arrived which I believe is in your photos towing the “ice box”. This crawler manoeuvred passed the bogged machine and towed it to Perisher Valley where we got out. About a week later when it was time for us to leave the transport was the crawler in your photos with the “ice box” in tow.   I travelled in the “ice box”, with my Auntie from Perisher back to the Hotel, now Sponars, so I know what it was like to ride in. Something I have never seen a photo of is that crawler tractor which we boarded at the cafe at Smiggin Holes and which became bogged in the snow several hundred metres along the snow. At the age of 8 years I can remember asking the driver of this crawler, with “ice box” in tow, “where was the other tractor which had to be towed?”  His reply was that it was jacked up on the ice near Charlotte Pass as it had shed one of its tracks."

Bill has also kindly forwarded the following thoughts on this occasion:

"The year I was taken to The Hotel, Smiggin Holes and Perisher, with my Auntie and Uncle was 1947. I have found out that two Weasels were purchased in 1946 for oversnow transport from The Hotel (now Sponars), to Charlotte Pass.  My memory of the tracked vehicle bogged in the snow at around 10pm and about 200m up the road from the Café at Smiggin Holes must have been a Weasel towing the sled known as the “ice box”....it would not take much to bog a Weasel in deep snow pulling the “ice box”.  If the crawler was any heavier than a Weasel together with the “ice box” the D4 would not have been able to pull it out. About one week after this event we were waiting at the café at Smiggin Holes to return to the hotel (Sponars), when a Weasel came passed travelling down the hill and with quite a bit of pace. In my earlier email I explained that we travelled back to the hotel in the “ice box” being hauled with the D4. Also we stayed in two huts at Smiggin Holes which were the only buildings there at the time other than the Café. There is a photo of one of the huts on page 23 in “Skiing Off The Roof”, also the two Weasels on page 78, and page 113 in “Highway To Heaven”. 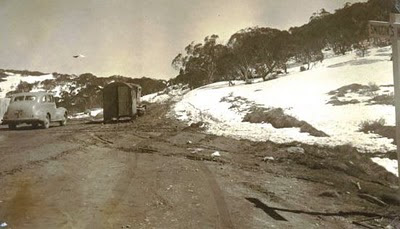 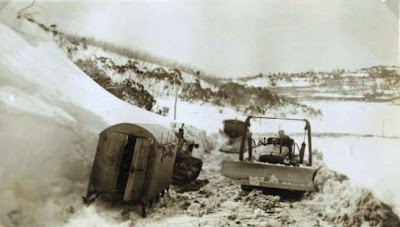 A c.1955 picture of a tractor and the "ice box" passing snow clearing equipment. Hard to imagine what the ride in the sled would have been like! The book 'Skiing off the Roof' (Rick Walkom) notes it was so cold inside, travellers often preferred to walk alongside!
Picture: National Library of Australia

Below are two more pictures of the D4 Caterpillar, "ice box" and another sled trailer which appears to have been constructed using at least one and possibly two bodies of the Citroen Kegresses, courtesy of Ralph Zollinger of Hans Oversnow. 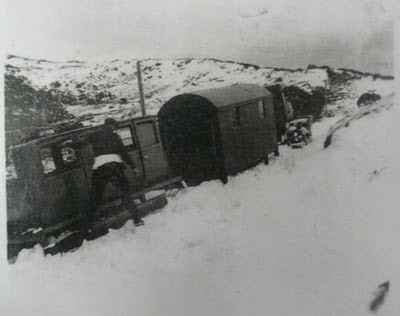 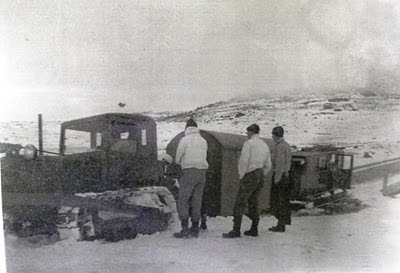 A further picture which shows a D4 and two trailers preparing to leave Charlotte's Pass.