Ratrac was a Swiss firm that produced oversnows, and re-sold some LMC oversnow models into Europe. While not as common as the "major" brands in Australia, some have been used through the years. As Ratrac is no longer in production they don't have a corporate website, however there are some picture of them here:
http://www.snow-groomer.com/index.php?cat=63 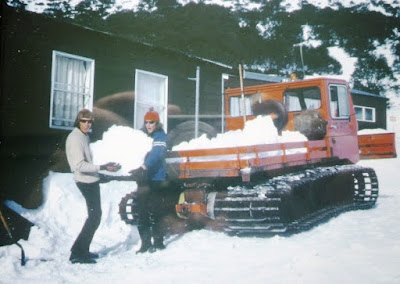 A Ratrac at Falls Creek in 1971 owned at this time by Alpine Developments. Photographer JonThePom (via ski.com.au) recalls: "We were using the one and only Ratrac at Falls to gather snow to keep the Summit T-Bar track together for one last October weekend. The only other tracked machines there at the time were a couple of Weasels run by Herbie at Oversnow Transport. I was one of the two drivers for the Ratrac which spent more time on bringing supplies up to the Frying Pan and maintenance work than grooming. No tillers in that day so skiers favoured natural conditions more than the smooth ice one could leave behind the Ratrac. It had notoriously weak transmission - you can see the final drives are not original and used to break shafts like carrots...perhaps a self-inflicted problem since it had an Aussie Falcon six-cylinder petrol engine?"
Picture: JonThePom via ski.com.au 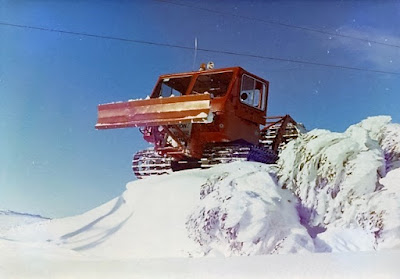 Another picture of the Falls Creek Ratrac, this time at Falls Creek summit again around 1970/71. Picture: Gerard Paviet via JonThePom 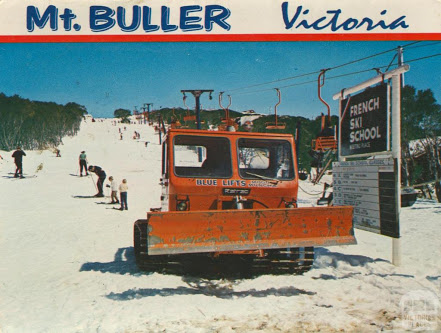 Damien Breitfuss has sent this great postcard which perhaps dates from the early/mid 1970s showing a Ratrac with blade for snow clearing and forming runs at Mount Buller in Victoria.
Picture: Damien Breitfuss Collection 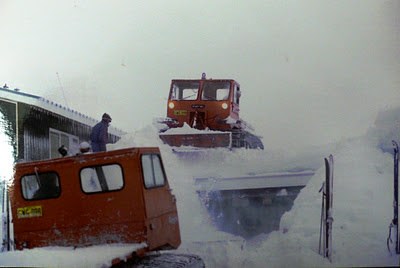 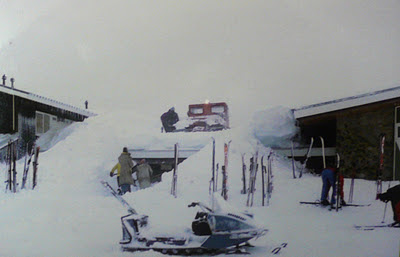 The two pictures above, kindly donated by Ralph Zollinger, show two Ratracs in use during a big snow at Perisher Valley I think in the late 1980s, Yes, that is a Ratrac on the roof! 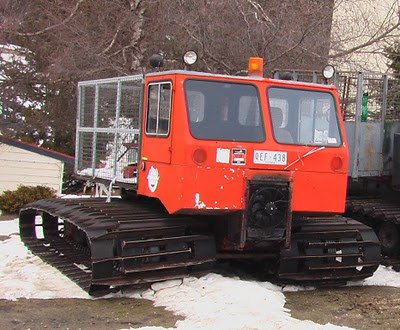 Symbolising the close relationship between Ratrac and Thiokol/LMC, Ralph Zollinger of Hans Oversnow advises this oversnow pictured at Falls Creek in 2009 has a Thiokol chassis however a Ratrac cab-over body.
Picture: Andrew Collier 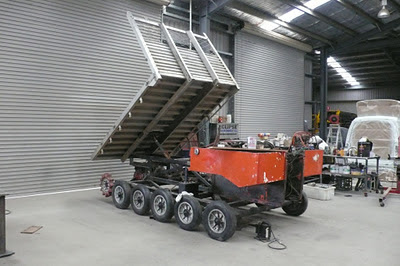 Moving ahead two years, the same Ratrac/Thiokol shown at Falls Creek in the earlier picture has now been purchased by Hans Oversnow and is here seen in their Jindabyne depot in late 2011 undergoing a complete ground up rebuild including fabrication of a new chassis amongst other major changes, a real credit to the mechanical/engineering skills of the Hans Oversnow team.
Picture: Andrew Collier 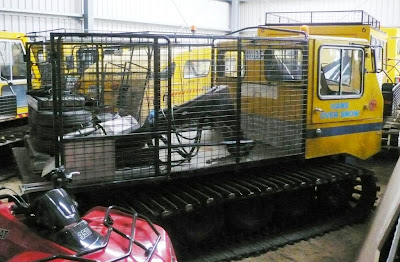 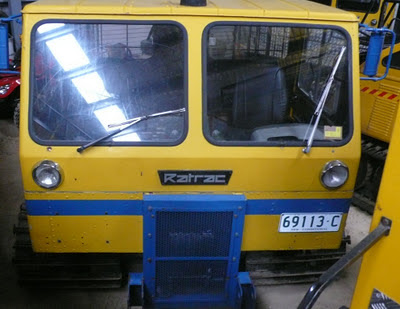 Also at Hans Oversnow's depot in late 2011 is this Ratrac configured for freight carriage, tucked in amongst the stored fleet awaiting the 2012 snow season. As with the other vehicles in Hans Oversnow's running fleet, the Ratrac is in superb condition.
Pictures: Andrew Collier
Newer Post Older Post Home