In 1946, the NSW Government purchased two M29 Weasels for the Kosciusko Chalet that the Australian Army had been trialling for jungle operations and had decided not to proceed with. These Weasels and others subsequently imported directly put in many years service in both the NSW and Victorian snowfields with at least two having served at Falls Creek in the late 1960s and early 1970s.

The below picture from Rick Walkom's book is captioned "Testing out the Weasel 'Snowmobiles' in 1946. Originally intended for the invasion of Norway, they arrived in their 'war paint'." 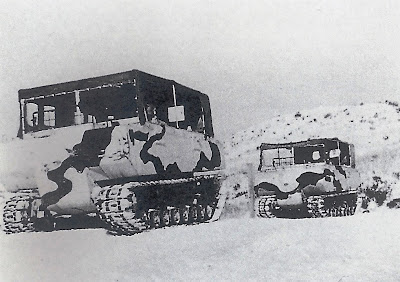 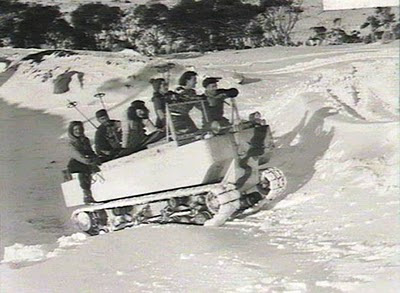 Another early picture of one of the Weasels in use in the Snowies is this 1947 shot of a non-amphibious model near Mt.Kosciusko in what appears to be its Army camouflage livery.
Picture: Mitchell Library, State Library of New South Wales 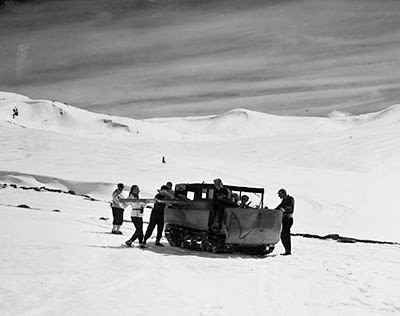 This 1948 picture shows skiers loading their gear into an amphibious model, again seemingly with traces of the camouflage from its Army trials still in place.
Picture: National Archives of Australia 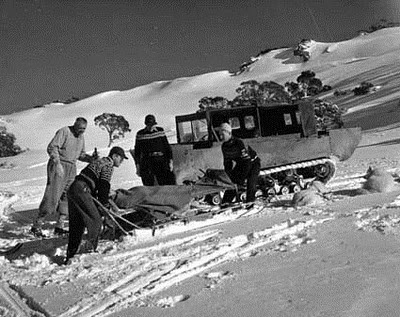 While this 1948 picture is titled “Snowmobile and Huskies help transport and injured skier in the Snowy Mountains”, it may show a practice or training session given the appearance of orderliness. 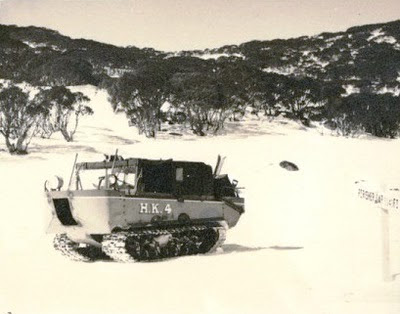 By the time of this picture at Perisher Gap in 1950, this amphibious M29 had been repainted and lettered, with the letters H.K.4 presumably standing for Hotel Kosciusko No. 4. 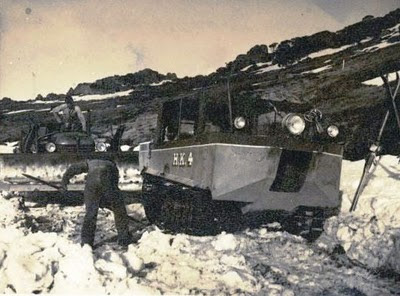 Another 1950 shot at Perisher.

A c.1952 shot of one of the M29s towing skiers.
Picture: The Australian Snow Pictorial, David Sisson Collection 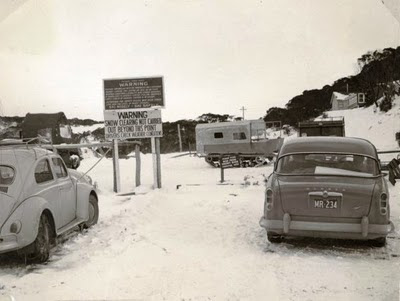 By 1955 this amphibious variant seems to have lost her numbering, gained a more permanent and utilitarian cover, and has possibly now been repainted into the red colour seen in the colour picture below. Here it’s seen at Smiggin Holes in company with a great Humber! 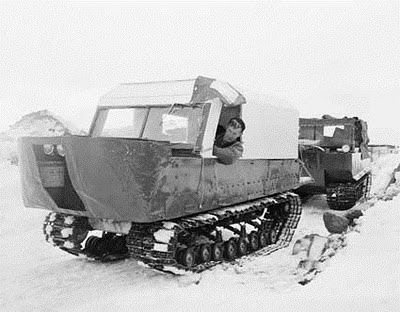 c.1955, two M29s, this picture interestingly titled “The two snow cats which carry guests to and from Australia's newest snow hotel the Man From Snowy River”. 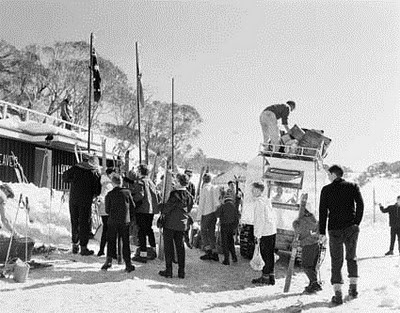 In 1959, an amphibious M29 is seen being loaded up and skiers boarding at Smiggin Holes for “transport to upper slopes of Mount Kosciusko”. 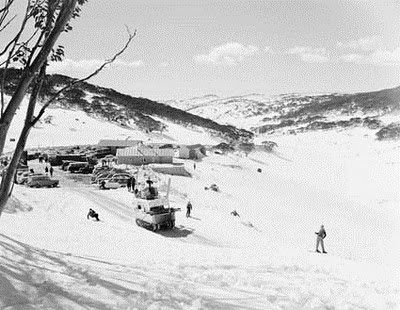 Perhaps the same day, the same M29 is seen “leaving Smiggin Holes, for the upper slopes of Mt Kosciusko”. The Weasel is travelling on the roadbed of the road that leads from Smiggin Holes through Perisher Valley to Charlotte Pass however snow has only been cleared to this point, with skiiers accessing these further points transferring to oversnow.
Picture: J.Tanner, National Archives of Australia 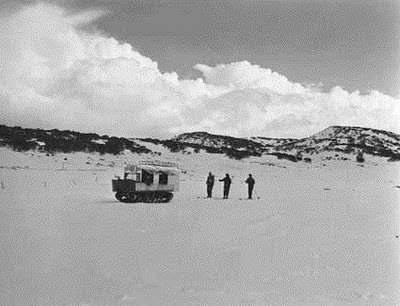 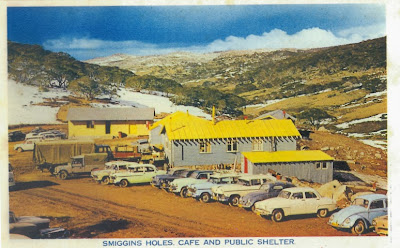 Colour pictures of the M29s in service are not common so this picture is included as it shows one of the Weasels parked at Smiggins on the shoulder of a season in the late 1950s. This scene is from a fold-out postcard that was purchased at New Adaminaby in 1960, helping to date it.
Picture: Nucolorvue Productions 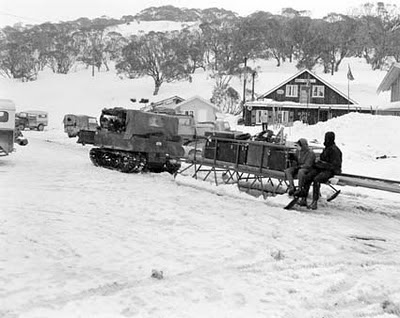 A non-amphibious M29 is seen crawling into Smiggin Holes in 1961 with a luggage sled.
Picture: National Archives of Australia 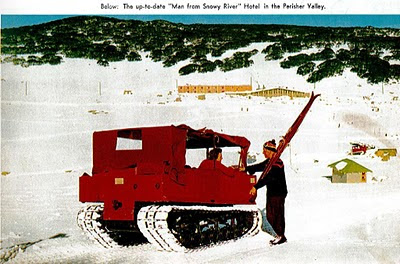 In this early 1960s shot, a non-amphibious M29 is at Perisher with the new “Man From Snowy River” Hotel in the valley below, together with another unidentified bright red oversnow, likely another Weasel.
Picture: “The Snowy Mountains of Australia : in natural colour”, Nucolorvue Productions, 1962 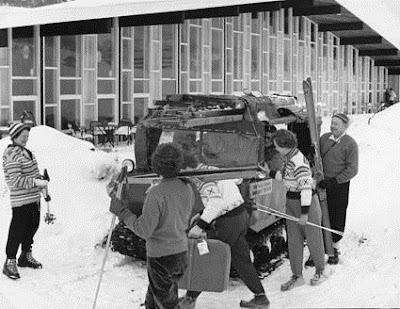 This picture dated 1968 shows at least one of the M29s still in use, in this case bringing guests to the “Man From Snowy River” hotel at Perisher Valley.
Picture: Douglass Baglin, National Archives of Australia

Ralph Zollinger of Hans Oversnow has kindly donated the following pictures of the Weasels in service in the NSW Snowies: 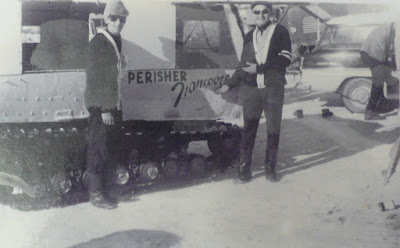 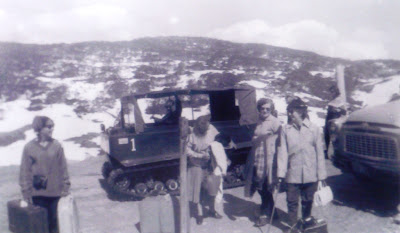 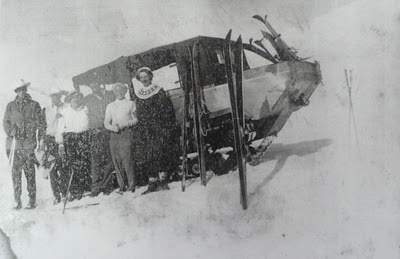 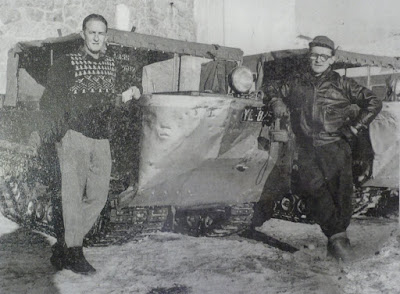 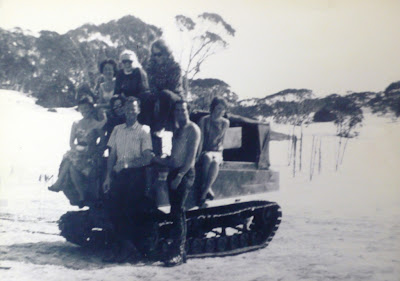 Further pictures of Weasels that I think are from Ralph Zollingers collection are shown below. If I have mis-credited these pictures, please let me know and I will correctly credit them.

Two Weasels with skiers well out onto the Main Range, NSW from "The White Roof of Australia" by Bill Beatty, 80pp., published 1958 by Cassell and Company. 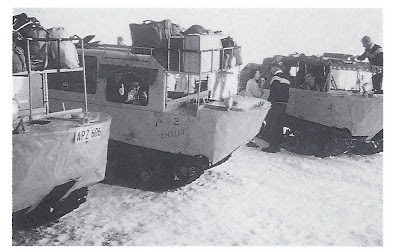 An undated picture titled of three Weasels used fo the Charlottes Pass run.
Picture: Rex Cox in "Skiing off the Roof", Rick Walkom
Steve Malikoff has contacted me and provided some very detailed background of the Weasels and their current state, an edited version of which follows:
"I'm currently working on restoring two Weasels here in Brisbane, and a friend of mine has another two in NSW. One of mine is in fact the one seen in a few of your photos, specifically the one at the top of your page where they are in their 'war paint' and the one below it with the half-dozen skiers on board - they are the same vehicle, australian Army Registration Number (ARN) 139999.

This Weasel was one of two T24's (the early designation for the first 2103 built with narrow 15" track, then assigned an M-number for the rest of production with 20" track) imported by the army for testing in (as far as I can determine) late 1944 to mid 1945. The army was intending to test them for use in the jungles of New Guinea and as such the two Weasels arrived in Australia with so-called 'tropical modifications' by Studebaker. I believe this was not much more than the addition of a pipe elbow into the gearbox to allow another quart or so of oil to be added to reduce overheating, which was a published MWO (Modification Work Order aka field upgrade).

The army kept both Weasels (one stencilled with the ARN 13999 and the other had ARN 145623) at the big vehicle ordnance depot at Bandiana and tested them at Monegeeta testing ground as well as on the mudflats in Port Phillip Bay in mid 1945. According to a report published by the army (and at the AWM) the vehicles (identified as '1-ton snowmobiles' in a memo) were found to be unsuitable for Australian conditions due to overheating, lack of armour and relatively high maintenance and as such, no further testing was to be done. By that time it was August 1945 and the war was ending anyway.Here they are at Bandiana:  https://www.awm.gov.au/collection/P05457.009/

In 1946 both T24s were auctioned or sold, to be purchased by the NSW Govt Tourist Bureau for use hauling skiers and their luggage up to the chalets (as Rick Walkom's book notes). The note about the sale is on record in one of the vehicle journals at the AWM, by the way. This is where your top photo comes in. The lead vehicle is 139999 and the other 145623. The chalet operators (or army) painted over the ARNs on the sides toward the front but otherwise left the camouflage pattern intact. By the way the Weasel was the only US vehicle to be painted in camouflage at the factory in one of three alpine patterns, namely an opposed 'crescent' shape as one pattern, a wave pattern and a 'Mickey Mouse' ear pattern. 139999 had the crecent whilst 145623 had the wave pattern. To my knowledge none of the Mickey Mouse pattern T24's came to Australia.

Anyway in your second photo most of 139999's camo pattern had been painted over except for the front of the hull. You can see in that photo a ding in the front of the hull where they no doubt ran into a tree. That indent is still there. There are a few more photos of this vehicle, mostly similar to that one. The next photo to my knowledge is of it on the ski fields in the 70s from Ralph. Ralph acquired the remains and my friend and I traded some other vehicle items with him for it in 2008. Here is a post I made on a military vehicle restorer's forum a few years back which takes up the story: http://www.mapleleafup.net/forums/showthread.php?t=10955
Presently I have this Weasel in my garage, undergoing (glacial-speed) restoration. The hull was rebuilt by my friend and I've had to source a lot of parts from overseas as there really isn't much at all in Australia. For instance a set of tracks came from the UK, and another set from the US with other parts coming from Sweden and Norway. To my reckoning there are about 8 or 9 surviving Weasels in total in Australia. My other Weasel is also a narrow-tracked T24 model, serial number 0046 (very early production) I imported from the USA back in 1999. This is further along in the restoration than 139999.
I am not certain but my hunch is 145623 was scrapped, leaving 139999 extant as the sole surviving WW2 australian army Weasel, all the others (M29C versions) being imported post-war as described in Rick Walkom's book. I do in fact have a single surviving piece of 145623, that being one of the top-secret air-drop brackets fitted to the sides of the hull (the plan was to parachute them with commandos into Norway, but that did not eventuate. The mission was actually carried out with commandos only).
There is a short video clip of ARN 139999 up on my Youtube channel '1944GPW' taken some years ago showing me rotating the hull on a rebuild 'rotisserie' jig: www.youtube.com/watch?v=jl9tq7LncHk You can see the double-cresent camouflage pattern and ARN on the sides of the hull toward the front. Compare this to the Walkom 'war paint' photo.  At present the hull is still on this jig (I did say it was going slowly). By the way, all credit for this restoration to date goes to a good friend of mine, John Wilson in Narrabri who has two fully amphibious M29C Weasels himself. He's presently restoring one of his two, he's a master metalworker and has done an enormous amount on getting these Weasels restored here in Australia, so once again all credit to him. Here is his thread on his M29C restoration:  http://forums.m29cweasel.com/forums/showthread.php?t=2723
John Wilson has also been kind enouh to reach out with details and photos of his own oversnow Weasel involvement:


"I am restoring an M29C weasel (amphibious version). Where my part of the story comes in was that Steve and I brought an M29C weasel in from the USA back in 2007. Steve took it down to the Gold Coast for a Studebaker meet (see photo) and low and behold by sheer coincidence Ralph was holidaying up there at the same time and went to have a look at the vehicles. When he spotted our M29C he saw the surfshield  on the front and said he found some like that back near Jindabyne. I had been searching for years (overseas) for the amphibious equipment for my weasel when Steve told about his chance meeting with Ralph I made plans to meet Ralph. From there I made myself known to Ralph and arranged a trip down to Jindabyne to look at the weasel parts he had salvaged from a rubbish dump behind Sponars guesthouse. Ralph and I travelled up to the rubbish dump where I found more amphibious parts. Please see photos. Ralph also showed me 5 pairs of Amphibious weasel track aprons that he had previously recovered from the dump. Deals were made and I became the proud owner of this hard to find weasel “Jewellery”.


From the weasel parts both Ralph and I recovered from the back of Sponars resort, I worked out that they (whoever operated the weasels) must have brought into the country five amphibious weasels. The equipment that I/we recovered (rudders, track aprons, surfshields etc) would have been quickly removed and dumped to make the weasel more user friendly as a ski tow come snow transported. Unfortunately , nothing remains of theses weasels today. Ralph said that there are possibly the remains of two weasels buried in sawpit creek.

When I was down there and after recovering amphib weasel stuff, Ralph showed me what remained of Steve’s weasel, “The Bogong Grub”. Anyway I am sure that Steve has told you the recovery story and sent you plenty of photos but where I come in, I rebuilt the hull for Steve using what remained of the “Grub” and from sections I cannibalised from the Red weasel that we brought in, in 2007." 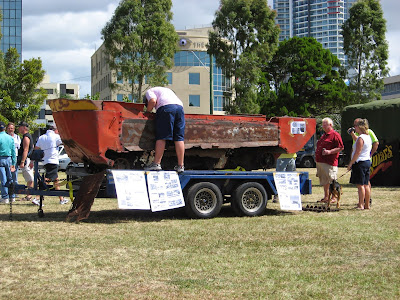 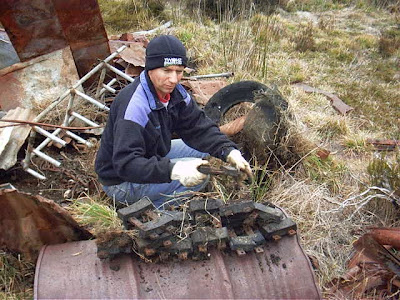 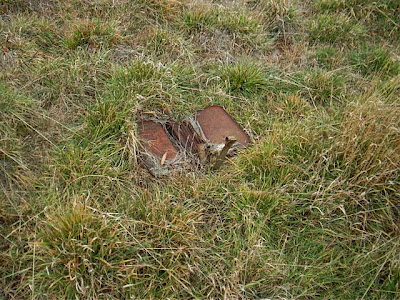 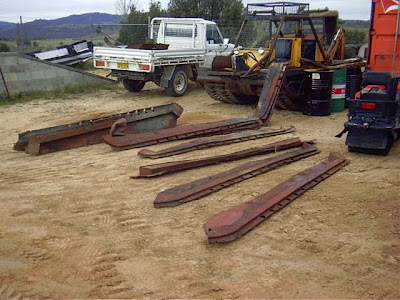 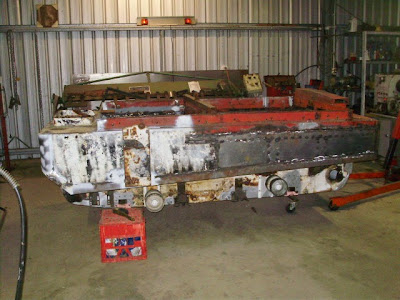