At least six Snow Tracs were imported for use in Australia, and a couple remain in existence including apparently two used by the Civil Aviation Authority to access remote snow bound towers. If you want to know more about SnowTracs, there's an excellent private site at: http://www.snow-trac.com/ and Wikipedia has a good overview at: http://en.wikipedia.org/wiki/Snow_Trac 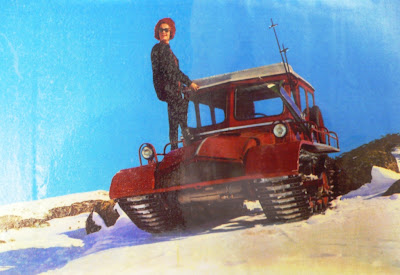 What could be more stylish than hanging out with your Snow Trac? A promotional picture taken in NSW and probably dating from the early 1960s.
Picture: Ralph Zollinger Collection 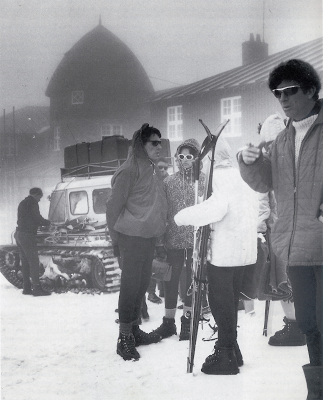 A Snow Trac is preparing to leave Charlotte's Pass in 1964, well loaded for the trip! The picture is from Rick Walkom's book and is titled "Transport frustration" and given the well loaded Snow Trac and the queue standing in bleak conditions, I think it's fair to assume that oversnow arrangements haven't always been smooth sailing!
Picture: Rick Walkom Collection in "Skiing off the Roof", Rick Walkom

The four pictures below have been generously donated by the Kalymaro Ski Club and show one of the Snow Tracs in use transporting skiers onto the Main Range during the "Big Snow" of 1964. This practice of accessing the main range via hired Oversnow was later ceased by the National Parks and Wildlife Service, so these pictures provide an insight into what would have been a fascinating ski experience, and a great Oversnow ride! 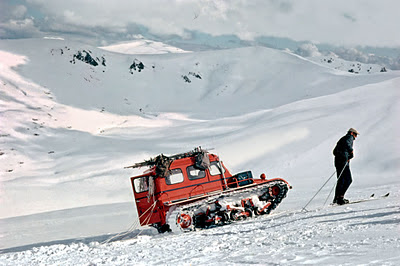 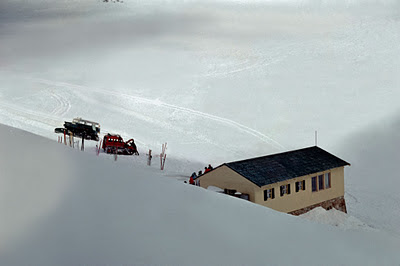 A Snow Trac in company with a Tucker SnoCat in Pioneer livery at Lake Albina Hut.
Picture: Kalymaro Ski Club 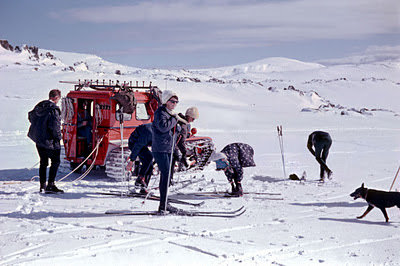 The pictures above and below show skiers unloading from the Snow Trac, the ropes used to tow skiers along being clearly visible on the back wall of the Snow Trac.
Picture: Kalymaro Ski Club 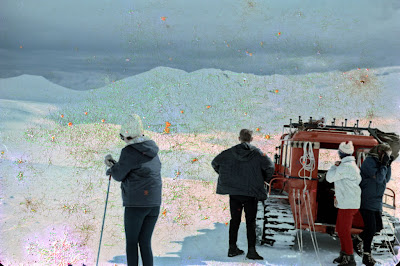 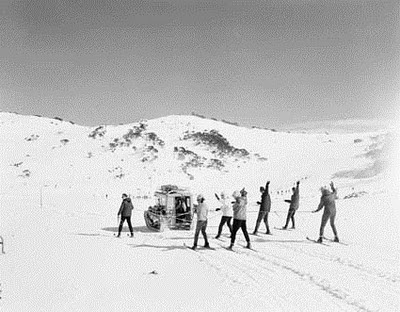 This 1965 shot is titled “1965 Track vehicle gives a helping hand to skiers at Charlotte Pass” and shows one of the SnowTracs towing skiers.
Picture: John Tanner, National Archives of Australia 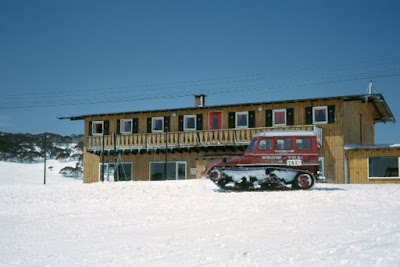 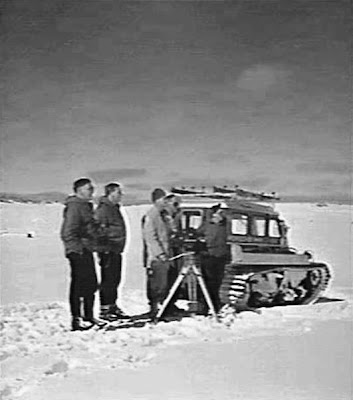 A 1966 picture of what appears to be a State Electricity Commission filming team. Given the date and photo sequence, they may have been filming the SEC’s Tucker in action (see Tucker section, 1966 picture)
Picture: National Archives of Australia 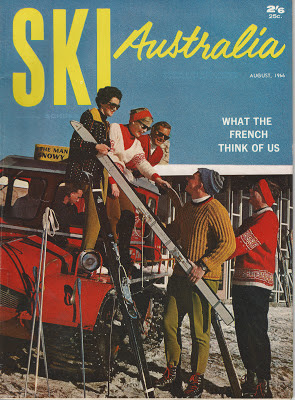 An excellent 1966 "Ski Australia" cover shot showing one of the NSW Snow Tracs in the employ of The Man From Snowy River Hotel. Times have changed - Who cares what the French think of us?
Picture: Damien Breitfuss Collection 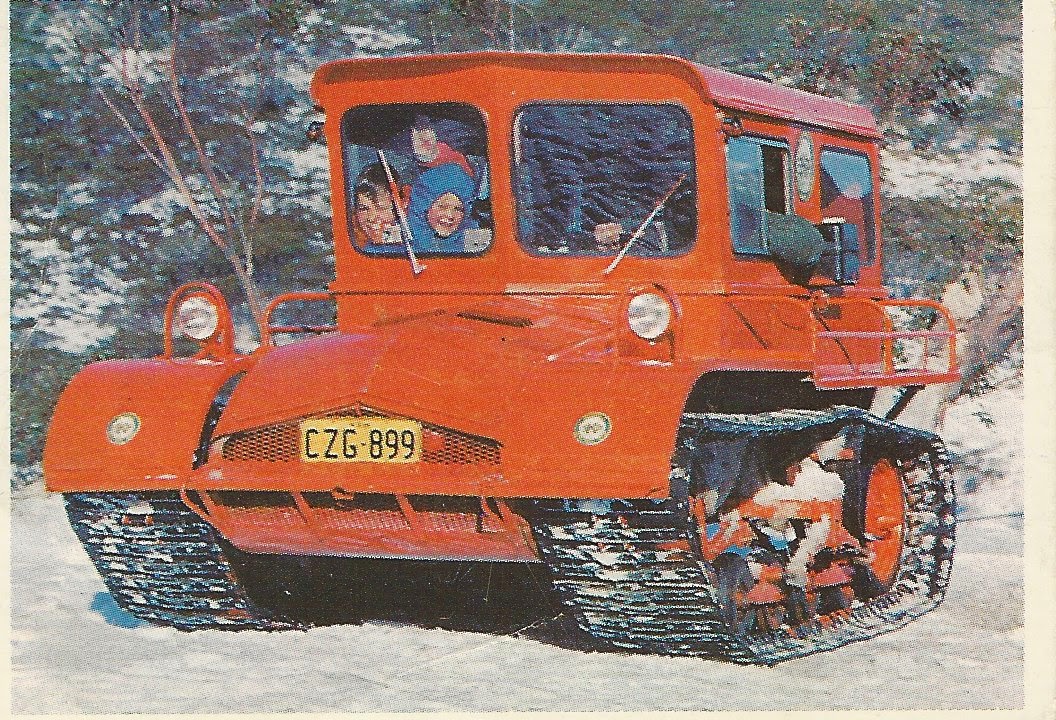 1966 must have been a big year for the Porsche Snow Tracs! Here also in that year is a Weetbix Collectors Card featuring one of the Australian vehicles.
Picture: Damien Breitfuss Collection 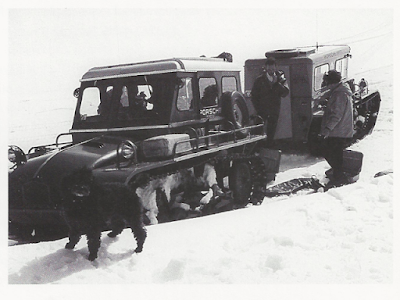 A good comparative shot of the two cab styles applied to Snow Tracs in Australia. Damien Brietfuss notes that 2 Snow Tracs were purchased in 1962 for transport to and from the hotels owned by KG Murray (foreground machine is one of those vehicles, unsure whether other purchased at same time) given condition Damien thinks this picture dates from perhaps 1966/67.
Picture: Damien Breitfuss Collection from "Highway to Heaven" by Peter Southwell-Keely 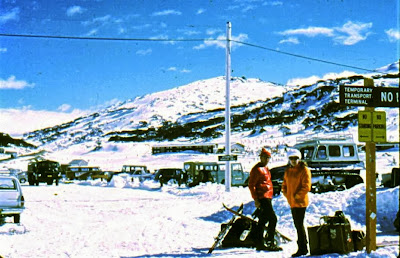 A 1971 shot at Perisher Valley showing a blue & white liveried Snow Trac parked next to the Temporary Transport Terminal at the edge of the car park.
Picture: Tom Marish 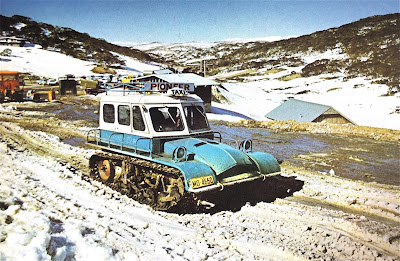 The above photo possibly shows the same Snow Trac on the Kosciuszko Road at Smiggins - now with "Taxi" adornment! . Damien Breitfuss notes this is one of two that ran out of Charlottes Pass around 1972-75.
Picture: Damien Breitfuss Collection
By 1974, two Snow Tracs were in the employ of the Sonnenhof Lodge for guests and as a general taxi service around Perisher Valley. The follownig three pictures kindly supplied by Damien Brietfuss were taken around this time. The Snow Trac with the rearward sloping windshield (factory cab) had been purchased from KAR, Perisher Resort. 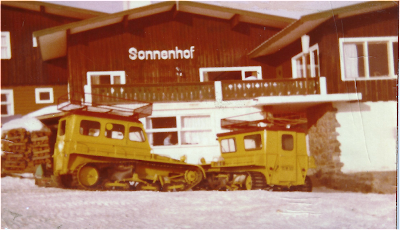 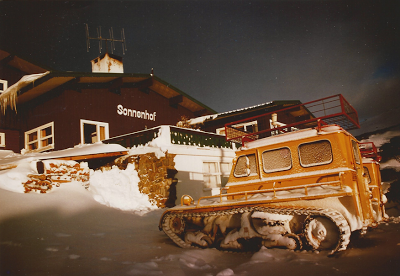 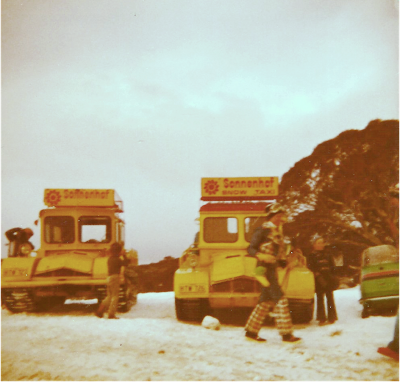 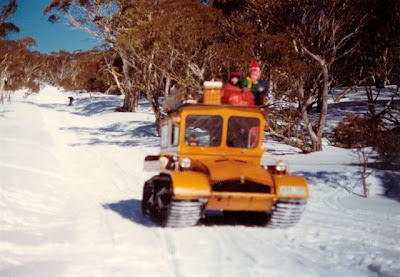 While the picture above is a bit blurred, it is a real rarity. This Snow Trac was apparently purchased from previous owner TAA (now defunct airline) at Falls Creek by the Tallangatta Ski Club and used to tow skiers up the Mt Wills Rd for skiing back down it before the Road was closed for this purpose. Judging by the picture colours and clothes this dates from perhaps the late 1970s to early 1980s.
Picture: VSG via ski.com.au 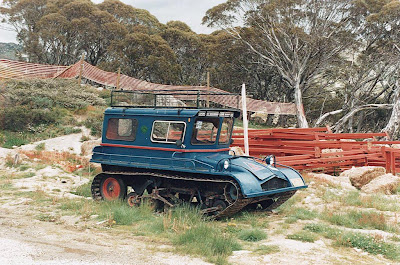 This Snow Trac parked at either Charlotte's Pass or Perisher off-season in 1989 looked like she still had a couple of seasons in her yet.
Picture: Andrew Collier 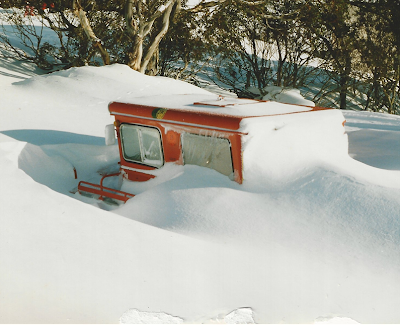 A Snow Trac quite well buried by one of the 1990 blizzards at Perisher Valley.
Picture: Damien Breitfuss Collection 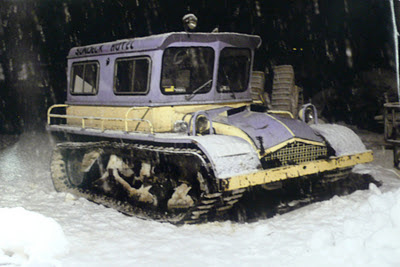 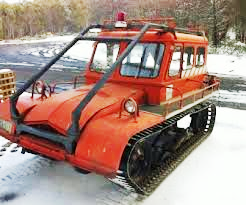 A recent find by Damien Breitfuss is this 1970s/80s Snow Trac still in use by the Director for Parks at Erica that manages the Mt St. Gwinear resort in Victoria.
Picture: Damien Breitfuss Collection
Newer Post Older Post Home